It wasn’t a great start to the day, weather wise anyway! The morning greeted us with dark, cloudy skies, mist and fog, and continuous drizzle and rain. As we made our way on the M9 we wondered if the weather would discourage others from travelling to our annual gathering in Emmaus. And it did as we later found out!

With my friend, Art, as co-pilot the journey passed in a feast of stories, jokes and reminiscences. Mar a deir an seanfhocal, “Gioraíonn beirt bóthar.” In no time at all we reached Emmaus where we were warmly greeted by Br. Pat Bowler, Br. Tom Costello and Br. Raymond Meynes. We settled in with a nice cup of coffee and swiss roll. After a short while the rest of the team of Dick Fields, Neasa Ní Argadáin, Mary Shanahan and Joe Tynan arrived so we set about our preparations  for the day ahead. Everyone had a role to play so we set about making sure that all eventualities were covered to ensure the day would run smoothly. Tom and Raymond had prepared a beautiful sacred space that would be the centre of our gathering, reflections and rituals. At the centre of the space was a copy of Rembrandt’s “Prodigal Son” as was fitting the theme of the day – “God’s Mercy, Compassion and Healing.” There were also other artifacts that would have a significance as the day unfolded such as the ‘cracked pot’, the folded quotations, the heart shapes and the oil. The ‘cracket pot’ had actually come from a Brothers’ Assembly a number of years earlier, the theme of which was the “Potter’s Clay/Wheel”

Mary and Neasa busied themselves in putting the final touches to the sacred space while I checked out connections, cables, wi-fi etc as we had a number of slideshows and videos in our presentation. The room was also decorated with posters displaying significant quotes that would be used during the day. After all the fuss had died down and things ‘looked good’, Dick and Neasa called us to order and put us through our paces, a kind of dress rehearsal for the main event to come. While I was familiar with the theme for the day and the various roles of the Support Group members it was only at the dress rehearsal that I saw it all fit together, how each part made up the whole. I realised we had struck on a theme that would resonate with people and that the day would be one of peace, tranquility, sharing, ritual, reconciliation and healing. A day that would remain in the minds and hearts of the gathering long after it was over. 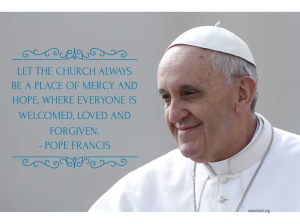 With all the preparations well in hand we set off for lunch of tea and sandwiches … and very tasty they were too!  Around 1.15pm the attendees began to filter in. It was still dark, dreary, miserable and wet outside. Mary took up her position at front of desk to welcome people on arrival and to register them for the event. I was on hand with my camera, as always, asking people to pose. None was camera shy and that made my job easier. It is great to have a pictorial record of days like this and it affords those who were unable to attend, for one reason or another, an opportunity to share in the day’s events.

Our members, friends, partners and associates gathered in the coffee dock for some welcome refreshments after their journeys from different part of the country. The room was a buzz of conversation and laughter as people renewed acquaintances and friendships. I met Jim Darcy for the first time since 1978 and it was great catching up on our life’s journey in the intervening years.

At 1.30pm the gathering was summoned to our meeting place for the day. Dick Fields, on behalf of the Timirí Support Group, welcomed everyone and set the scene for the day.

“Pope Francis’s mission today is to live the gospel of mercy and compassion wherever he goes.  This belief, I am sure, inspired him to announce in a homily on the 13th March 2014, “I have decided to call an extraordinary jubilee that is to have the Mercy of God at its centre.  It shall be a Holy Year of Mercy.  We want to live this year in the light of the Lord’s words “Be merciful just as your father is merciful”. Our Gathering today with the theme, God’s Compassion, Mercy and Reconciliation challenges us to respond to this invitation, to acknowledge and believe in it but most importantly to live it.  Let us realise humbly that compassion and mercy are God’s love within us.”

A full version of his welcome is also available on this blog. The welcome was followed by Mary beautifully reading the story of the Prodigal Son. After some time in reflection on this story each person was invited to the sacred space to select one of the scattered quotations. All the quotations linked into the theme of the day and those gathered were asked to share their quotation or their reflection on the story of the Prodigal Son. The range of authors was wide and varied but the quotes shared the common theme of mercy, forgiveness and healing:

“God’s mercy is fresh and new every morning” – Joyce Mercer

“Where mercy, love and pity dwell, there God is dwelling too” – William Blake

These are just a sample of the quotes and there was great sharing of experiences and reflections on the quotes and the story of the Prodigal Son.  While the sharing was happening we enjoyed the beautiful calming music of  Anthony Miles:

At 3.30pm we took a break from our reflections and sharing to get some fresh air. However, the rain had not let up for long and most people were confined indoors. The coffee dock was very popular.

Some did brave the elements but didn’t venture farther than the front door. After the break we continued our exploration of the day’s theme and were treated to a beautiful story about the “Cracked Pot”, a Chinese Legend.

This led to a very lively discussion and sharing among the group. Many admitted to being “cracked pots” themselves or at least knowing a “cracked pot” or two. One of the gathering thought of setting up a group for “cracked pots”. Jokes aside we all understood that we should accept each other for what we are – that each of us is UNIQUE and that’s what makes us BEAUTIFUL. WE ARE EACH OTHER’S OPPOSITE AND COMPLEMENT.

Br. Raymond introduced us to the next ritual, that of healing ourselves and others. He spoke about oil and its significance in anointing and healing the body. We were invited to anoint one another on the hands with the words “May the Lord heal you in mind, body and spirit”. In a very moving ritual each person anointed the hands of the next person with the lavender oil while we were inspired by the beautiful Leonard Cohen song, “Come Healing”.

Following on from this ritual each person was invited to the sacred space. Here there were paper heart shapes and each person took one away. They were invited to record, on the paper heart, their commitment to seek and recognise ways they could bring healing to themselves and others. Afterwards there was a sharing of commitments like:

We had now come to the end of a very special day that certainly left a significant impression on my mind and heart. It was a very gentle, spiritual day of sharing, openness, ritual, reflection and commitment to mercy, compassion and healing. Well done to the Timirí Support Group for organising the event and for the theme they chose and the professional manner is which it was presented.

At this stage Dick had the pleasant duty of making a presentation to Br. John Bourke and Dónall Ó Conaill  for all their years service to Timirí Éamainn Rís, both having been involved since the beginning. We thank them for their commitment over the years, we will miss their contribution but our friendship will continue for many years to come. We ended the formal part of the day with another song by Leonard Cohen and this was followed by a delicious meal – the perfect close to a perfect day, despite the weather. 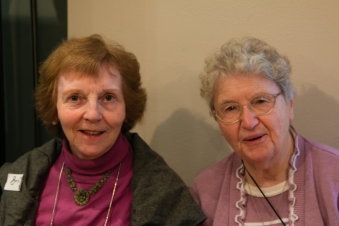 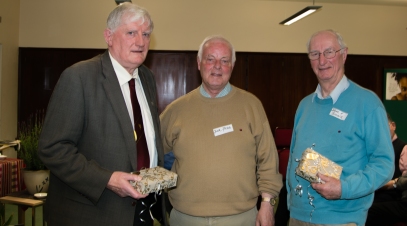 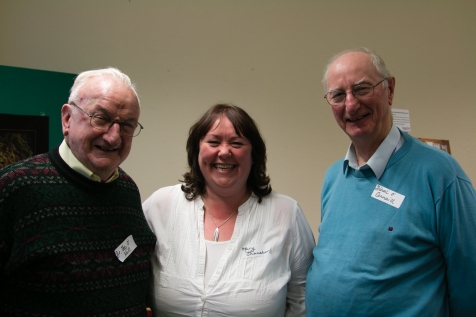 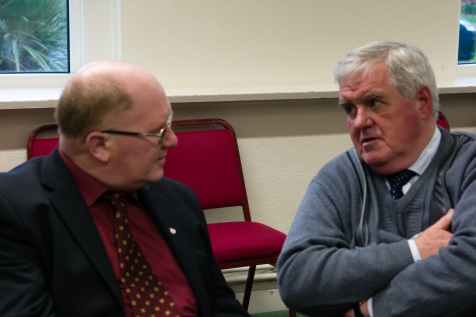